Hello all!! I’m back as promised to continue sharing some of my favorite shots taken from my stake out spot on Market St during the parade. So, let’s get right to it!!

First off for tonight, we have Bill Neukom, who up through 2011 was one of the team’s managing partners. Although his duties have now come to rest on the capable hands of Larry Baer, Neukom is still very visible in the Giants organization and will be remembered as a crucial element to that 2010 World Championship winning team. 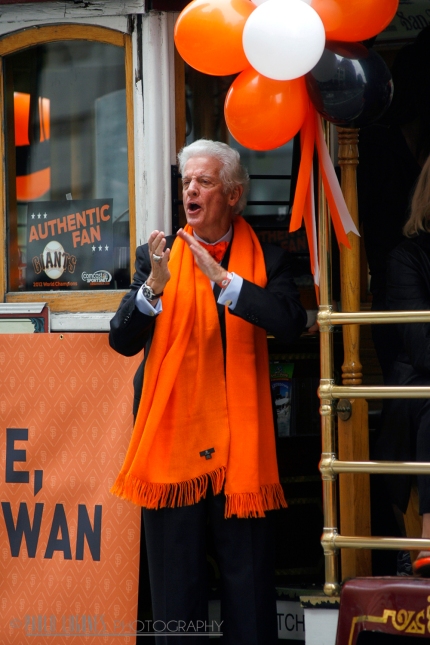 Next up on the parade route was no other than Gaylord Perry. Perry was with the Giants from 1962-71 and even threw a no-hitter in 1968. Famous for doctoring balls with Vaseline for his famous spit ball, he went on to do great things after released by the Giants, but still to this day is synonymous with all the greats that have worn the uniform. I was fortunate enough to catch Gaylord looking right over to me while he waved, so it made this image feel very personal.

Following Perry in the parade was Orlando “The Baby Bull” Cepeda. Orlando played with the Giants from 1958-66 at a time when a good number of the GREATS of all time in baseball were playing with the Giants. In a land full of talent, Cepeda managed to hold his own. Always with a hefty batting average throughout his career with the Giants, Cepeda will be synonymous with all the Giants greats for all time. His likeness is commemorated just outside of the 2nd and King St entrance to the ballpark, which happens to be one of our favorite gates for bobble head giveaway games!! 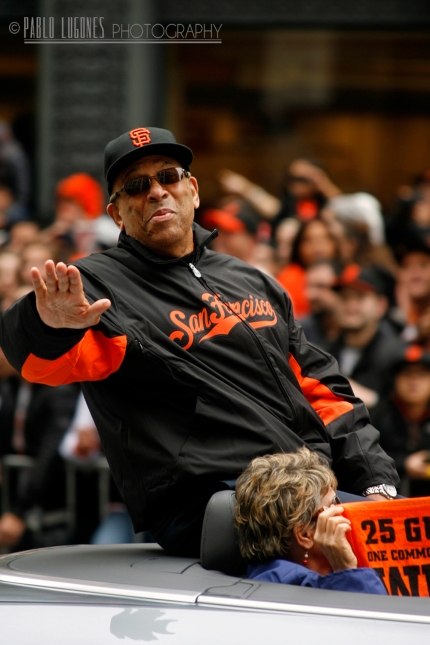 After playing with the Giants almost his entire career, it’s a shame that Juan Marichal only saw one World Series game during his career. Juan Marichal was known for his high leg kicks and pinpoint control with his pitches. A Giant all to his own, Marichal was one of the most feared pitchers of his time. His likeness will always be remembered in the bronze statue featuring his high leg kick windup over by the 3rd street China Basin entrance to AT&T near the 3rd street drawbridge.

Of all the living legends that have worn the Giants uniform, who would you leave for last before bringing in the World Championship team? WILLIE MAYS, OF COURSE!!! There isn’t enough room on this blog to say all the accolades that has earned. He is and forever will be THE GIANT!! Today’s players are very fortunate to still have him around for knowledge sake and the fans young and old always scream for the Say Hey Kid!! We love you, Willie!!

First up from the 2012 World Championship San Francisco Giants was the longest tenured General Manager in all of Major League Baseball. Obviously, Brian Sabean knows what he’s doing at the helm of the Giants roster and has weather the storm through many years where we didn’t even clinch the division. Apparently, Brian only had one finger working throughout the entire parade. Lucky for us, it was his fore finger letting us know who’s number one!!! Keep doing what you’re Sabes!!

Is that Sabean showing off a huge booger?!?!? Nope, he’s just letting the world know where we stand, baby!!!

Next up was a faux-cable car filled with a number of scouts that were instrumental in scouting the opponents throughout the 2012 season. The most familiar face in the bunch, and what I am constantly told to be one of the sexiest guys ever by my wife, was none other than Pat Burrell from the 2010 Worlds Series Championship team. Very much like he was during the 2010 parade, Pat was sporting his beer and cheering everyone in sight. While I couldn’t drink along with you, Pat, we’ve got nothing but love for you. 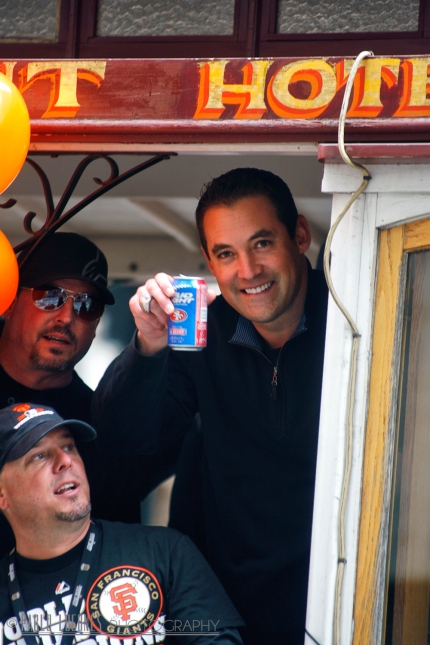 Next up in the parade line was the longest tenured staff member of the Giants, our awesome Clubhouse Manager, Mike Murphy. Mike has been with the Giants since their inaugural year in San Francisco 1958 as a bat boy. Obviously, Mike has moved passed that supporting role to another, but he is just as instrumental to the team as any of the other coaches. Don’t be fooled by the calm demeanor that Murph usually displays when sitting on the bench. My father-in-law played with Mike back in the day when they were both much younger, and Mike was just as unruly a player as the best of them today. To a man who clearly knows the game through and through, here’s to you Murph!! 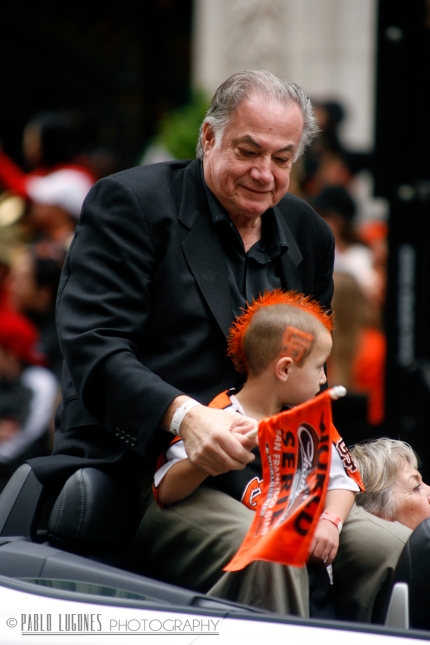 The Murph and the Grandson. Live it up, kid!!

Here come the big guns, folks!! The first car with the 2012 coaching staff had none other than Mark Gardner and Dave Righetti. Mark played with the Giants from 1995-2001 and is currently our bullpen coach, which should come with a separate award all of its own with the class clowns that we have down there. Somehow Mark manages to get their “working hats” on and has the BEST bullpen in all of baseball, as is apparent with two WS rings in three years. Dave spent the majority of his career with the Yankees, but we won’t hold that against him today!! Dave has the arduous task of being the Giants starting rotation pitching coach, which can’t be easy at all. With responsibility over The Freak, Zeets, MadBum, Vogie and The Horse, you would start to wonder if you could actually walk out to the mound for a clutch out and talk those pitchers down from their emotions to focus on the task at hand. Dave, you are the man!!! 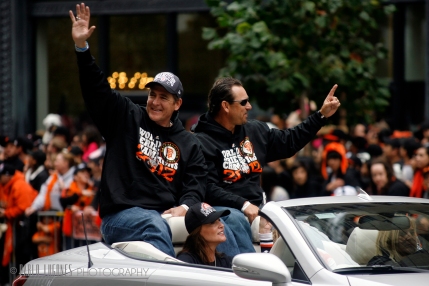 A Pair of Pitching Coaches…

Next up was Hensley Meulens and Ron Wotus in the parade lineup. Hensley came up to the Big Leagues after coaching the AAA Grizzlies in Fresno in 2010 and the departure of Carney Landsford. He must have made a difference, cause we won the whole damn thing in 2010 and again in 2012. Hensley keep doing your thing!!! Ron Wotus has been our bench coach since 1999, and doing a damn good job at it too, if you ask me. Luckily, Bochy isn’t a hot head, so he doesn’t see a lot of action as the backup manager, but is crucial for all the in-fielding coaching and scouting information. You guys are tops!!

That’s all you get for tonight folks!! I’ll be back again tomorrow to share some more coaches, leading up to the general manager, including a couple of crazy pictures of stuff that I didn’t think should have been part of our celebration parade and maybe even get to show a few players. Stay tuned and good night!!